Recently I caught two movies back to back at the cinema which had some interesting parallels. The Hunger Games tells the story of young people who are forced by the government to kill each other off as public spectacle, while The Cabin in the Woods concerns a group of young people who find themselves targeted in a remote location but begin to suspect that they are being manipulated by a higher power. Unfortunately the plot similarities aren’t quite as striking as the manner in which each film manages to squander an interesting premise with either unimaginative direction and lack of thematic ambition, or poor plot construction and tonal inconsistency. 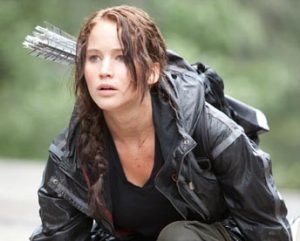 The Hunger Games has been much compared to Battle Royale in its premise, but whereas its Japanese counterpart was content to plunge us straight into the titular kerfuffle with a minimum of context (something along the lines of “you kids got no respect… go kill each other”), The Hunger Games spends a large part of the first hour in explaining how the games developed as a way of maintaining social order through careful rationing of hope and fear, and in introducing us to our hero, Katniss Everdeen, who will be our ticket into the games.

In this long opening section we witness the process by which Katniss is compelled to volunteer for the games as an act of self-sacrifice, and becomes determined to overcome the odds and return to her family. Jennifer Lawrence manages a fine balance between strength and vulnerability in her portrayal of the character, yet the film-makers’s determination to portray Katniss as sympathetic is at the cost of the psychological and moral ambiguity that one might expect from the premise. The idea of children being groomed and displayed for an event in which they will be forced to kill each other as spectacle is an unsettling one, yet the film does little to exploit this sense of unease. We are encouraged to root for Katniss as she attempts to impress the judges and charm a fatuous audience in order to increase her chances of survival, yet there is no exploration of the cognitive dissonance that ought to accompany this – the idea of having to nurture an enthusiastic public image in preparation for an appalling act of violence.

Even when the games begin the emphasis is on the visceral, with Katniss being put through a physical endurance test while the psychological implications of the situation are barely commented on, and her relationships with the other contestants are never more complicated than simply ‘friend or foe’. As Battle Royale demonstrated, it is a situation that is rife with possibilities for betrayals, tenuous alliances and crippling paranoia, but as the plot develops it seems increasingly geared towards making our protagonist’s struggle less and less complicated. After the games begin there is only one moment where the stakes actually seem to change, in the form of a sudden change of rules, yet this only serves to reduce the dramatic tension by draining any hint of fear or distrust from her relationship with Peeta. That this twist essentially propels us into the third act means that the climax is unforgivably lacking in drama.

The film’s unadventurous direction further compounds its thematic weakness. The games are presented to us primarily in tight, hasty framings, with the camera hurtling along with Katniss as she rushes to and from danger, allowing us only brief glimpses of the violence. Though this effectively puts us in the place of the protagonist, allowing us to identify with her lonely and disorientated state it seems somewhat ill suited to the film’s premise – that the games is a spectacle enjoyed by a wide audience. The snatches of glib showbiz punditry that punctuate the action are evidence that it is viewed by the outside world with some sense of detachment, yet the film is so intent on following Katrina that we never get a sense of this bigger picture. Even at the very beginning of the games when the players converge in a sudden orgy of violence the camera stays firmly alongside Katniss and we can only guess as to how such a spectacle is presented to the viewing public.

This lack of perspective makes it difficult to know what, if any, allegorical points the film is grasping for, and mean that, despite the lengthy build up, the film’s centerpiece is lacking in any meaningful context. Aside the behind-the-scenes negotiations that allow sponsors and politicians to fix the outcome for their own ends, the only hint of the games’ impact on the wider world is a brief moment of spontaneous discontent which is snuffed out too quickly to threaten the narrative stability. At no point, in fact, is there any sense that Katrina poses any real threat to the established order. Throughout the opening section she submits to the training process without protest, and during the games she is primarily reactive, never even contemplating a killing in cold blood, and the one stubborn gesture she makes towards the end is too fleeting to carry much dramatic impact. 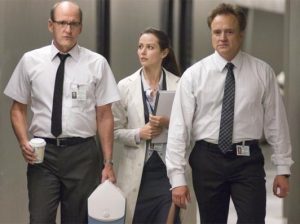 Conversely, it is precisely the manner in which the The Cabin in the Woods seeks to expand its scope that proves its undoing, though it is great fun for much of its running time. The set-up is promising – the idea that the hokey twists and capricious characterisations that typify a certain type of American horror film are due to some form of sinister behind the scenes manipulators bent on a slavish adherence to formula allows for a clever deconstruction of some recognisable tropes. Unfortunately the conclusion is unsatisfying, and it feels as if the film is overreaching itself in attempting to create a world which can logically explain the imaginative set-up. Though it still works as a metaphor for the relationship between horror films and their audience, it might have been more fun had the film-makers not been so intent on finding a neat explanation and taken a more literal approach to the outlandish implications of the first half.

Early on I found myself reminded of The Beano strip The Numbskulls, in which the main character, Ed, is controlled by tiny people pulling levers in his head, and the final revelations were something akin to the writers of the strip revealing that Ed is in fact a genetic experiment, and part of a governmental conspiracy with global implications. Which is basically to say that I found the final portion of the film to be somewhat histrionic and a poor tonal fit with the earlier scenes in the control facility, the mundane rationality of which provided such an effective counterpoint to the ludicrousness of their product.

In fact, the scenes in the facility are perhaps a little too effective at undercutting the parallel story, as their emphasis on humour undercuts many of the scares in the cabin. As the relationship between the two stories becomes clearer it is increasingly difficult to invest in the cabin scenes and they begin to feel as if they are holding up the pace. The final showdown in the facility must be one of the most appealing aspects to horror fans as a cacophony of genre clichés explodes onto the screen, but it feels a little like a missed opportunity as it is crammed into the third act and ends up as a single riotous action scene when, given more time to develop, it could have allowed for more time to savour the individual elements, further showcasing the under-used effects work with the possibility of some genuinely scary set-pieces (Joe Dante’s The Hole is an excellent example of how this kind of idea can be expertly paced over an entire feature). Ultimately the film feels like a good idea which deserved a better showcase.

It’s a shame that two films which could have provided something different – a dark, morally difficult franchise opener for teenagers, and a fresh, witty take on a genre which has become somewhat stale of late – should end up being less satisfying than a movie in which a bunch of superheroes get together to crack jokes and punch aliens. But The Avengers, which completed my triple-bill, is much more well constructed, and also has Samuel L. Jackson in an eye patch. Although lack of depth perception is something that shouldn’t trouble anyone watching the movie any more than it does him, it works and is sort of fun. Whether or not that makes it more or less commendable than an ambitious failure is another question.